Candy Candy's author Kyoko Mizuki has first written a little sequel after the end of the manga. It contained 3 volumes, and even if the story didn't change lots of things, we could read letters between Candy and Albert, Candy and Terry or Candy and Susanna.

Kyoko Mizuki didn't want to write Candy's sequel for years but she finally changed her mind - probably thanks to all devoted CC fans - and wrote 2 volumes to finish Candy's story. 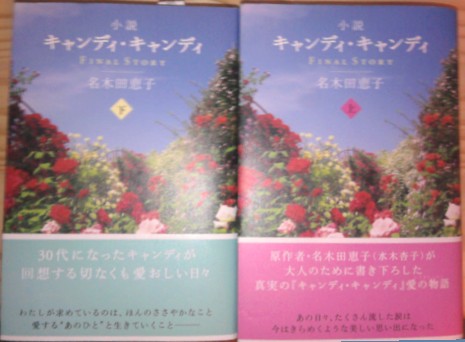 Candy is in her 30s now. In the books, we can see what has happened to her and her friends as she also reminds some of her inedit memories. Good news, she has finally found happiness, even though the author doesn't say exactly with whom. It's up to the reader to imagine and guess.

The books got published in Italy in 2014 and in France in 2019. The covers of the French version are quite different from the Japanese ones which have flower gardens. However I find them very elegant and pretty. The first book begins with a preface by the author for the readers of the French edition. There is no illustration in the novels, certainly because of the conflict with Yumiko Igarashi. For the french version, each volume has a subtitle ("Candice White, the orphan" and "The Prince on the hill"), which is not a bad idea but I wish they had chosen another subtitle for the second volume as it creates ambiguity among fans. The publisher, Pika Editions, explained the choice of the titles with the issue of each volume and said that it did not mean to influence the interpretation that can be made of the end of the work.

You can also support the following petitions to have an official translation of "Candy Candy: The Final Story" in english or other languages: