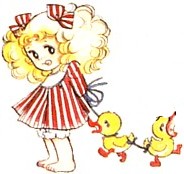 Everything begins in an orphanage near the Michigan Lake in the south of North America. One day, Miss Pony and Sister Maria, the two responsible ones of the orphanage, find two babies: Candy and Annie. Some years later, Annie is adopted by a wealthy family, the Brightons. One day, Annie writes to Candy that she can't be her friend anymore because she doesn't want people to know that she grew up in an orphanage. Candy is very sad because of that, she can't believe that her best friend can change like that. She runs to her favourite place, to the hill near the orphanage and begins to cry. She sees there a boy who wears the traditional scottish clothes. They talk a little and then the boy disappears. That boy is Candy's first love. Candy finds his brooch and takes it. She doesn't know who he is, so she calls him "the prince of the hill". 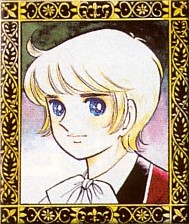 Mr Leagon, a member of the wealthy Andrey family, searches a lady companion for her daughter Elisa. So Candy goes to the Leagons' mansion. But Elisa and her brother Neil don't want her and do everything to sadden Candy. Mrs Leagon who realizes that Candy gets on well with the servants, makes her the servant of Elisa and Neil who are even more cruel to her. Meanwhile, Candy meets Elisa's cousins, Archie, his brother Stear and Anthony who looks like her prince. Candy falls in love with Anthony and it is mutual. But Elisa loves Anthony too and she can't stand that Anthony spends his time with Candy. Candy meets also Albert, who loves animals, who lives alone and doesn't have a home and they become very good friends.

Stear, Archie and Anthony want to protect Candy from the Leagons' cruelty and they write to the head of the Andrey family, Mr William who decides then to adopt Candy. Candy is very happy with her three friends. But one day during a fox-hunt Anthony falls from the horse and dies. Candy is very sad and decides to go back to Pony's Home.

After some days, Candy is sent to London according to Mr William's order. She'll study there with Stear, Archie, Elisa and Neil at the St-Paul's College. On the way, she meets Duke Grandchester's son, Terry, who is going to study in the same school. At the beginning, she doesn't like him at all but after she sees that he's a good person and falls in love with him. Candy meets at school a shy girl called Patty and they become friends. Annie comes to study there too and one day everybody learns that she grew up at Pony's home and she begs Candy's pardon. Annie loves Archie and Stear and Patty fall in love with each other. One night, Candy meets Albert who is working at a zoo in London. Some months later, Albert goes to Africa and decides to take charge of people and animals there.

Thus Candy spends a lot of time with Terry and her friends. But one day, Elisa who loves Terry, sets a trap to them and invites them to the stable at the evening. Candy who thinks that it is Terry who called her to the stable goes there and Terry does the same. Elisa and some nuns come there and Elisa tells to the nuns that Candy and Terry often see each other at the stable. Candy will be expelled but Terry decides to leave the school and go to America so that Candy can stay there. But Candy can't live there without him. She decides to find her way too and goes to America after Terry.

After staying a while at Pony's Home, she decides to be a nurse and goes to a nursing school. Then she is transfered to a hospital in Chicago. She meets there her friends Stear, Archie, Annie, Patty, and later Elisa and Neil who have come there because of the beginning of the World War I in Europe. One day, Candy learns that Terry became an actor. Terry and his company are on a tour in Chicago for a day but Candy can't talk to him. Terry meets Annie, Archie and Stear who tell him that Candy wants to be a nurse and she stays at the hospital. Thus, Terry writes her a letter when he goes back to New York and they begin to write to each other. 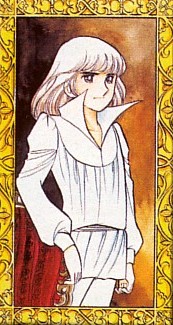 One day a new patient is brought to the hospital. It is Albert who has lost his memory; while he was leaving Africa, a bomb exploded near him and he was injured. Candy who wants to accompany him until he remembers his past decides to live with him in the same apartment. Meantime Terry sends Candy an invitation to his new play, "Romeo and Juliet". He will play Romeo and Susanna, an actress who loves Terry, will be Juliet. Candy is very happy that she'll see him soon. But during the rehearsal, an accident takes place and Susanna who saves Terry's life loses one of her legs. When Candy comes to New York, she learns the event and decides to let Terry to Susanna.

When she arrives to Chicago, she learns that Stear went to France to join the army. Meantime, Neil falls in love with Candy and wants to marry her. Candy is expelled from the hospital because of him. She begins to work in a small clinic. Meantime, Albert is cured and remembers everything. But he decides not to say anything to Candy. Their neighbours tell her bad things about Albert; they say that they saw him wearing black dress, dark glasses, and getting into a black car like gangsters and talking to thugs. Candy doesn't want to believe what they say but Albert decides to leave the apartment. Meantime, Stear dies at the war.

Later, Aunt Elroy, who is the second head of the family Andrey tells Candy that she must marry Neil because Mr William wants that. Candy doesn't accept and decides to talk to Mr William. When she sees Uncle William, she's very surprised because he's nobody else than Albert; as he was very young, Aunt Elroy has decided to hide him until he would be ready to be in charge of the family. Albert doesn't let Neil marry Candy. At the end, Candy understands that Albert is also her "prince of the hill".