In Turkey, Candy Candy was first published at the channel TRT in 1970's. Then in 1996, another channel, Kanal D, published it changing the dubbing cast. I've watched that anime for the first time in Kanal D (I was almost 12) and saw it many times in this channel, then in Show TV, Star TV, Kanal 6, etc. The problems between Candy Candy's authors, Kyoko Mizuki and Yumiko Igarashi, didn't prevent us to watch it and the last publication of the series is on 2004. The only effect of the process Mizuki-Igarashi is that we could watch until the episode 52; the channel bought until that episode before the problem Mizuki-Igarashi but later because of that process it couldn't buy the following episodes... But some Candyfans subbed and dubbed the episodes in Turkish so that we can watch at last the end of the series ^_^ 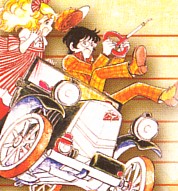