For the french publication of "Candy Candy Final Story", Keiko Nagita, a.k.a. Kyoko Mizuki, was one of the guests at the Paris Book Fair 2019 (which took place from March 15 to 18, 2019). Such a big opportunity for fans like me to meet the one who wrote the story of the heroine of their childhood ! I had the honor and the pleasure to meet the author twice during her visit; first at the VIP meeting on Friday, March 15th, and then for an interview on Saturday as a staff member of a French website about manga, Bulle Shojo, which has a partnership with the publisher of the books in France, Pika Editions, that gave us this great opportunity. I was so excited ! Thank you, Pika, thank you all my friends from Bulle Shojo ! Here is the story of my encounter with one of Candy's mothers and the interview. You can also find the original article in Bulle Shojo.

On Friday, March 15 at 3:30 pm, a small committee meeting took place at the Ladurée Tea Salon, also known for its macarons. There were about fifteen of us that had this privilege; partners of the publisher Pika, influencers or winners of the contest launched by the publisher on its website. I was there as a representative of Bulle Shôjo. I was so excited to meet Keiko Nagita, aka Kyoko Mizuki, the author of my favorite manga that still makes me dream today. I first saw her at the entrance, she was smiling and seemed accessible but I did not dare to approach her.

They took us to a room upstairs where two large tables were prepared for the occasion. The setting was really beautiful. A pyramid of macarons was at the center of each table, a different cake in each plate and rose petals everywhere, reminding us of Candy's world. They gave to each of us a small bag containing a copy of the first volume of the novel - entitled Candice White the Orphan, an exclusive metal bookmark in addition to a cardboard bookmark and a jar of Ladurée Marshmallows, reminiscent of the marshmallows that eat the children of the Pony's Home in the novel ...

We were all a little intimidated at first. Mr. Mehdi Benrabah, Editorial Director of Pika, introduced himself and explained that we could ask for autographs on the novels and ask our questions to the author. Ms. Nagita was going to sign with the pen that she had bought 40 years ago in France and used to write the last chapter of Candy's story. The ink was even scented with roses. The author was in a room next door that could be reached through a doorless entrance. I was sitting next to that entrance and could glance furtively. Then each one of us passed in turn in the room and I was the second to pass. 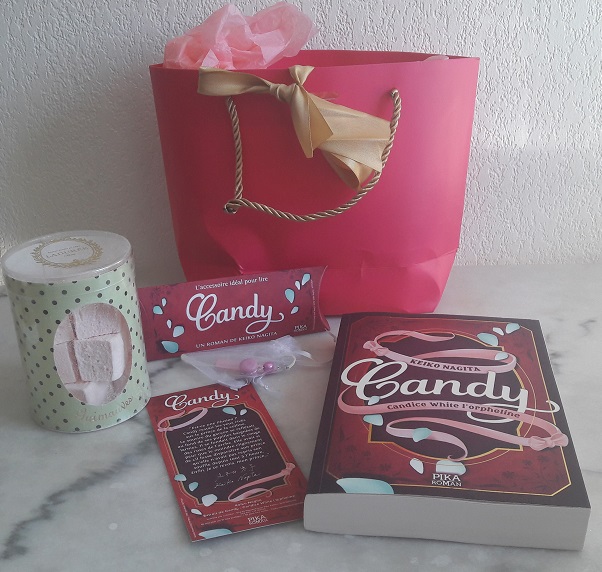 Nagita was very friendly. His agent was doing the translation. Since I had a 40-minute interview with her the next day, I kept my questions for that moment and did not want to take much of her time. I explained that I had discovered Candy when I was in Turkey more than 20 years ago and that Candy was still popular there. I also brought my copy of the novel in Japanese. She was surprised and asked me how I found it because apparently the novel is out of stock. I explained that I had ordered it on the internet as soon as it was released even though I did not even know how to read Japanese, as I wanted so much to have it. She seemed to be touched and dedicated my Japanese copy in addition to the French edition while we took photos. She thanked everyone for coming. I was on my little cloud. While writing my name on a paper for the autograph, I saw the name of the person who preceded and realized she was Sophie, the webmaster of the candyneige site, one of the first and the best websites about Candy. I was very happy to see someone I had chatted with on the net and to meet another big fan of Candy. I did not have the opportunity to chat with the people at the other table but the ones around us were mostly influencers or bloggers who were followers of Young-Adult literature. They did not seem to be as big fans of Candy as the two of us but were happy to find a heroine from their childhood. It was a dream day with beautiful encounters in a beautiful setting.

I could not wait to see her again the next day, but at the same time I was so nervous that I could not sleep well that night...

The day of the interview

The interview was scheduled at 10am at the Legend Hotel. We were greeted with my sister in a small room. Then the author arrived in an elegant dress with her daughter, her agent and her interpreter. She thanked me for the day before. I gave her a box of delicacies from the Bulle Shojo staff, which contained specialties from the south of France, as I arrived from Marseille. She said she would keep the box even after finishing the content and that in one of her mangas (Premier Muguet I think), one of her characters was leaving for Marseille but she had never been there herself.

I presented Bulle Shôjo and repeated that I was a very big fan since I was 12 years old. She asked me what a Bulle was (it's a bubble), I showed her with my hands and her interpreter explained. She asked me if it was of the anime that I was a fan, I told her that I started with the anime and then read the manga. Then she asked me if I was drawing mangas myself and we laughed when I said I was drawing fanarts but I was not good at it and I would be ashamed to show them to her. 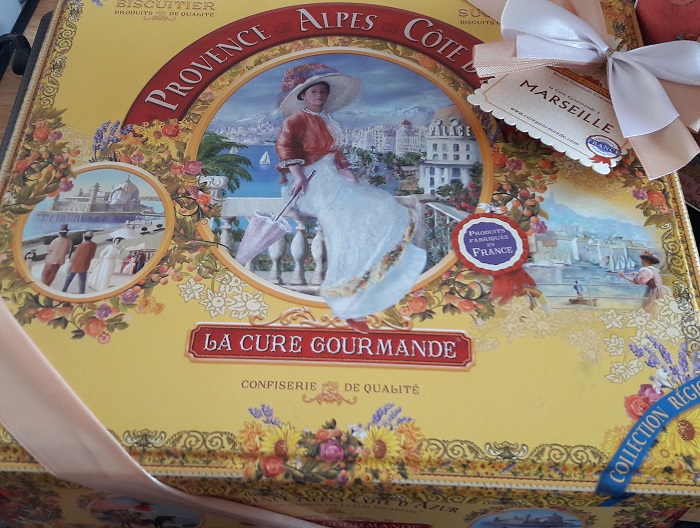 Then we started the interview quickly, since the author had a busy schedule with other interviews, book signings and the book fair. I was too stressed and I stammered the questions I had prepared... When I think about it now, I think I could have done better. But it was my first interview and I think I would have been less stressed if it was someone else in front of me. I felt like a little girl in front of her. At the end of the interview I had even more respect for that lady and her vision of things.

In the afternoon, the author was going to autograph her novel at the Book Fair, then in bookstores. Having already had my autographs and lived two unforgettable days, I let the chance to other fans and visited other stands of the fair. The next day, a conference was on the program, broadcasted on the publisher's website. It was a very rich program for Candy fans that Pika Editions had organized.

I thank again the publisher and all my friends from the Bulle Shojo staff for giving me this opportunity. It was a dream weekend that I'm not ready to forget.

Go to the Interview page